In the prehistoric ages, many of our somewhat monkey-like ancestors certainly hung out among the sands and rocks left uncovered by low tide to grab, always hungry, fleeing crabs and some little fish trapped in the pools. They were using hand to catch preys, then they switched to sharp bamboo spears. Over time some of their particularly forest traits were lost and named men, more profitable devices were invented such as nets and the trident, immortalized by the god Neptune equivalent of Poseidon. Far beyond, they tried to produce more precise and long-range instruments than the harpoon launched with the arm and a couple of centuries ago, or so, they tried with small bows to be used in short dives underwater, made with the slats of their home umbrella and quite suitable to skewer some salpa or lazy scorpionfish. It was a sport more for hunger and, for this, they dedicate with great passion to improve their gear of sea hunters, also providing things to fix to the feet to increase their propulsion when diving. A young Istrian boy named Ludovico Mares, transmigrated in adulthood to Rapallo on the Liguria of Levante (East Liguria) was also part of this meager gang of inventor-hunters of the sea, one day still far away defined as scuba divers. In 1949, he founded a small company with his name, competing with a certain Egidio Cressi who preceded him of almost a decade as an almost unknown artisan, three years ago he too became the owner of a small company called the diving fisherman.
Both produced masks and fins, then successful spearguns, but none was the inventor.
It happened that at the end of 1930, news filtered from the nearby Cote d'Azur of a speargun for hunting fish just invented by the French man of Russian origin Alec Kramarenco who had perfected, applying a pistol-like handle, the refined spring tool released before by Raimond Pulvenis (picture 1).

Immediately the enterprising Genoese Cesare Malagamba obtained the manufacturing license, it was 1938.
The whole area was rich in artisans like him, and the Malagamba speargun (pictures 2-3) inspired other similar creations.

Among these, the products of Egidio Cressi, a bank employee by day and artisan in the evening, soon became popular.
Between 1942 and 1944 from his workshop were born the Siluro, the very famous Cernia Sport 2-meter long (picture 4) and the Saetta of 140 centimeters with his brother Saetta Corto (short), half the size (picture 5), all equipped of compression spring and branded "The Fisherman - Cressi". Name which will change right after when, the bank employee quits his position to completely dedicate to diving activity, by founding "Cressi Sub – The diving fisherman" company with headquarter in Genoa in Corso Torino 38, as documented by the historian Franco Martini. The series of Cernia and Saetta speaguns extend and perfect; in Italy, spring system is not discussed, until the first elastic spearguns branded Mares arrive and propose as a technical alternative.
They are the July of 1950 followed by Juni (picture 6), extremely simple guns of medium power, but market still asks for spring ones, so Mares offer Abel, then in ’51 the August followed by August pistol (picture 7).

After some time, no one hears from Malagamba; in the ‘40 and ‘50 years, several other exquisite artisans appear not only in Genoa and surroundings, sooner forgotten, able to produce unique pieces or miniseries of spearguns sold directly to those who requested them. Only few names remain, few drawings, some pieces to collect (pictures 8-9-10).
We only have Pizzutti's brochure from 1949 which shows 5 models, including a speargun with a telescope for hunting from the surface and another with two barrels (fig. 11-12-13). Then, in 1950, a certain Fiap company produces the Baleno, a compression spring device long 178 centimeters and divisible in two parts, by losing two screws and one latch in front of its handle (pictures 14-15). Always in those 50 years, Aquatic is born in Genoa and presents the spring Marte and the Supermarte with a length from 110 to 200 centimeters.

Rome does not want to deface and, in the 50s, with Siama presents the Barracuda with spring, followed by the Express with suppressor and Albatros with extension spring embellished by brass particulars (pictures 16-17). Always in the capital, for a moment the well-known Salvas also dealt with spearguns, apparently producing the SuperBucher, the spring speargun with rack suppressor that Raimondo Bucher wanted in 1951 (pictures 18-19). It will return to deal with this sector ten years later, developing the S1 with a pre-compressed air tank from his factory in Castelnuovo Scrivia.

In ‘56 the toy factory Molgora proposes the Neptune Kid, a small spring speargun for young boys long 55 cm. with rear handle (picture 20), while the company Piovan from Padua launches the Folgore of 80 and 120 cm with central handle and extension spring, with rear shaft attachment and safety (picture 21). Pirelli too faces this world and proposes its first speargun, also with spring.
Moreover, in diving spearfishing something changed, and manufacturers realize it. For many divers underwater hunting is above all research of prey with capital “P” to be undermined with spearguns of maximum power in the Mediterranean Sea and, above all in the tropical ones where prey dimensions consent memory pictures of great impact (picture 22).
CO2 system appears to be the ideal solution so, in 1951, Cressi presents the Aer 51 chargeable with tiny single-shot cartridges, those used for fashionable seltzer. Mares do the same in 1953, with May (picture 23) followed by May Stuart, equipped of a large capacity tank. 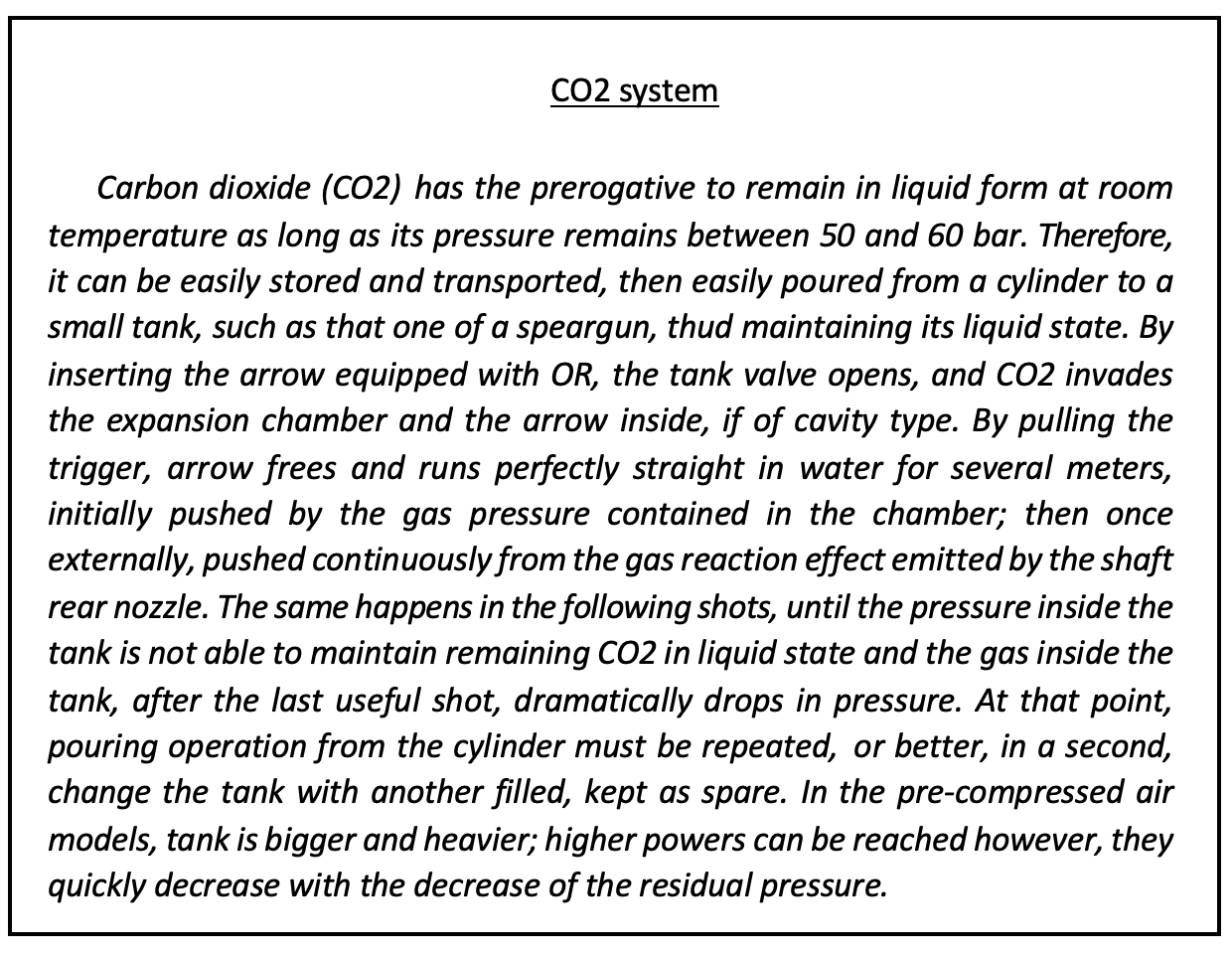 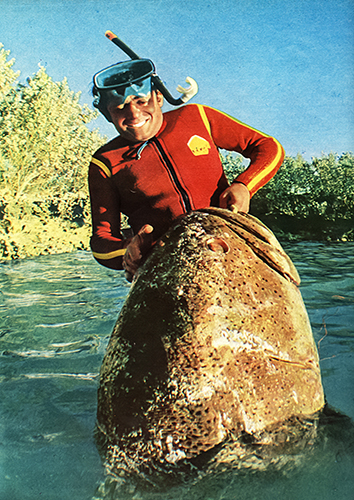 The year after, the powerful Super Tum with CO2 of Eng. Costantino Veraldi of Turin arrives, tested at 300 bar with changeable tank (picture 24); in the same year, the newborn Mordem of Demetrio Morabito appears with news for the Italian market with an explosive cartridge speargun. It is the Razzomare (picture 25) that sooner will be noticed, with the fascinating double shaft (pictures 26), with pistol (pictures 27) and with the harpoon launcher version for boat fishing, equipped with butt and large front-line roller. Also, Mares follows this trend for some time, with Bestmare with cartridge in ‘54 and then with Rapallo, but it renounces by preferring CO2 of May. Later, also Bicchiarelli from Turin will be engaged with CO2, usually busy with other projects presenting in ‘60 the elegant Corsair (picture 28).

In the meantime, the Alcedo company always from Turin, a well-established manufacturer of fishing reels and other items for fishing rods undertake another way. Making the most of the patents of Eng. Carlo Alinari deposited in 1954, begins the year after the production of the prestigious Hydra hydro-pneumatic speargun, developed in several successive models (fig. 29-30). To note that Alinari is going to be famous worldwide as developer of the decompression meter, presented four years later from Sos, a company owned together with Eng. Aldo De Sanctis. 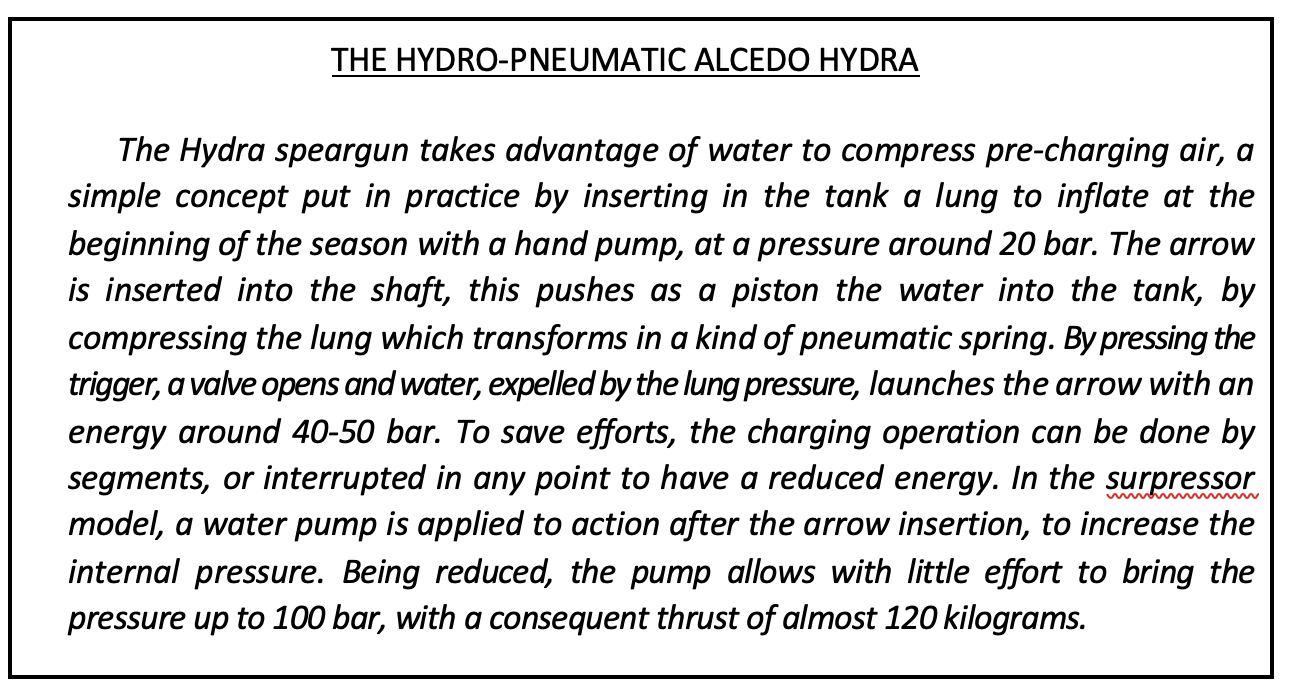 Spring speargun lovers, much more robust and simpler to handle, certainly do not give up. In fact, in 1959, Cressi promotes the remarkable Cernia Velox (pictures 31) while, the following year, Zangi company presents the powerful Hunter equipped with compression spring with power reduced shortly after combining to the monstruous Hunter 2 with two shafts with double reducer (pictures 32). Without considering the horrendous Comet of Galeazzi (pictures 33 )remained as a prototype, unique for the charging system of its extremely powerful spring with compressed air of its rear cylinder.

In the meantime, the manufacturers’ world is rapidly evolving. At the beginning of 1960, small artisans and minor factories began losing their space. The major part disappears or change business; really few grow and, with their often genius creations contribute to the big development of what is, now, the sector of major interest in the diving environment.
Italian and European regulations prohibit the use of spearguns that require muscle strength to be charged, being considered "not sportsmanlike". Consequently, all CO2 models, those with explosive cartridge and pre-compressed air disappear from the market.
After a short period of great fury, superpowered rifles go into sharp decline, completely useless even for the largest prey of our seas and only cause sorrow for the great mass of hunters. In fact, shooing a fish of small dimensions they tore it to shreds while, hitting a rock was meaning to destroy the spear or harpoon or worse.
Elastic speargun, the protagonist in France and in other countries doesn’t have followers in Italy. Mares, after the first June and July will propose an elastic model only after twelve years. In the middle of the 50s, Cressi preferred a different technical development with Mignon and Jolly, in which elastics were internal, interesting pieces but with limited success.
New rules lead to leave the world of spear hunting names such as Siama, Sporting, Bicchiarelli, Cirio, Galeazzi, Alcedo, Pirelli, Zangi, which were attracted to this sector because of its continuous expansion. On the other hand, in this decade new brands are born such as Technisub, Tigullio, Tecnisport which immediately are noticed for their creativity.
More popular in Italy are now oil-pneumatic spearguns and, to lunch them overwhelmingly are the two leader companies Mares and Cressi, followed by Technisub.

Mares leaves May with CO2 and in 1961 presents the oil-pneumatic Jet A (picture 34), the first of a series which will continue with Jet B and Superjet ones, then substituted by Vico, Titan, and by the infinite Sten (pictures 35). Cressi at his turn leaves the too sophisticated Lampo project (picture 36), presented in only very few testing pieces and presents, in 1964 the pre-series of Mach intended to have a bright future (picture 37) followed by Kid and Jumbo. Mordem, always searching for original solutions presents the Molac (picture 38), based on the principle of hydraulic press. 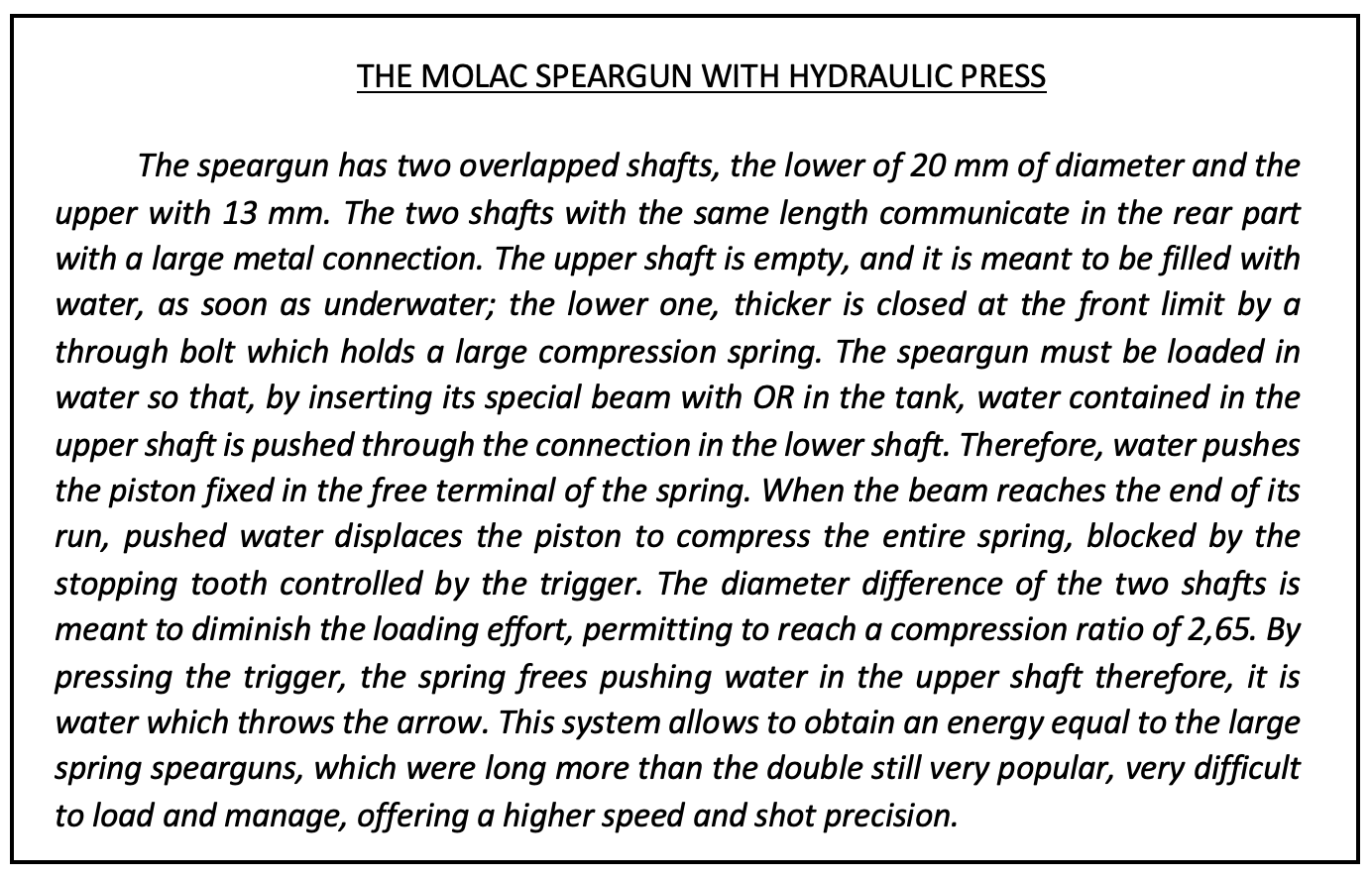 Technisub born since few years shows itself immediately with the Jaguar in 1964 proposed in different versions, followed by Puma, Panther, Jeans. In Milan, the Petrali company offers the Tahiti Air  in four lengths to satisfy every need; at the end of the 60s, Longo Sub propose Thomas, dedicated to its Tomassini employee (picture 39-40-41).

The first half of the following decade confirms this trend. Diving has embarked on the path of industrialization, driven by the unstoppable growth of the sector. Divers are still hunters from the large part; the speargun-cylinder combination is the rule; returning on the surface with a prey if the goal of many dives. Other companies get involved, the pneumatic speargun comes in a myriad of types and models.
Then, very soon everything changes. Around 1975 a word appears: environmental awareness, until that moment presents only in vocabularies. Environmental awareness is on the fish side, and, also in Italy, it will bring to the prohibition of sea hunting with cylinders. Other epical turmoils sum and, soon we realize that diving enters a new era.
Diving hunting takes a back seat, in advertisements and in the common imagination the speargun and the harpoon fish are now part of the symbols of the past.

Note: All spearguns mentioned in article have their technical sheet in  this website. The little decorative speargun in the presentation box is by Federico de Strobel.